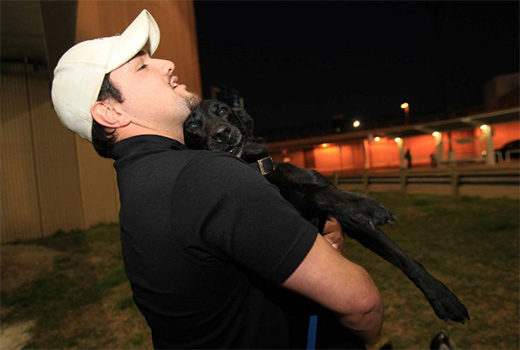 Smiles all around as US Marine Steve Heath greets CWD War Dog Ivy, his partner in Afghanistan who saved him and other Marines multiple times with her expert bomb sniffing nose.

The following is a reprint of the article that first appeared in the Houston Chronicle:

For a moment, Ivy the black Lab looked confused. She’d never been to Hobby Airport before, and it seemed as if strangers were surging toward her.

One of them, Stephen Heath, knelt down in front of her. He patted her head, he scratched her ears, he talked to her in a voice only she could hear.

And then, it was as if Ivy knew. Heath, her U.S. Marine handler in Afghanistan in 2010, was going to take care of her forever.

The former sergeant straightened and took the newly retired bomb dog’s leash. Within two minutes, they were playing ball and marching toward the exit, in step, in rhythm. 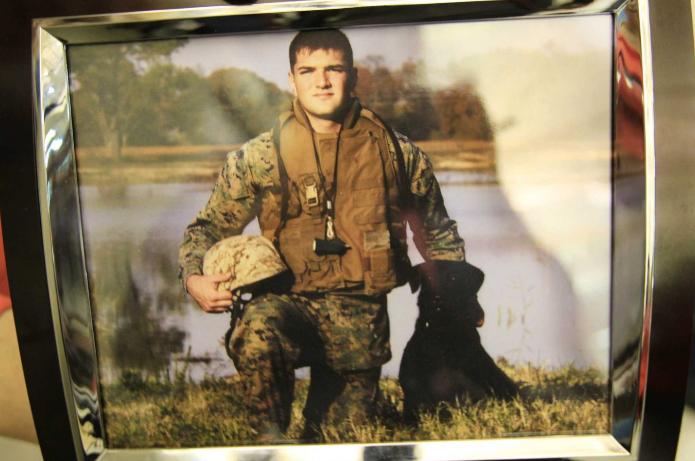 No more bombs, no more war, no more separations, ever.

When he finished his enlistment in 2011, he’d had to say goodbye to Ivy, who still had three years to serve. Heath contacted the Marine who would be Ivy’s new partner, telling him what a smart and skilled dog she was.

He also told everybody who would listen: When Ivy retired, he wanted to adopt her. 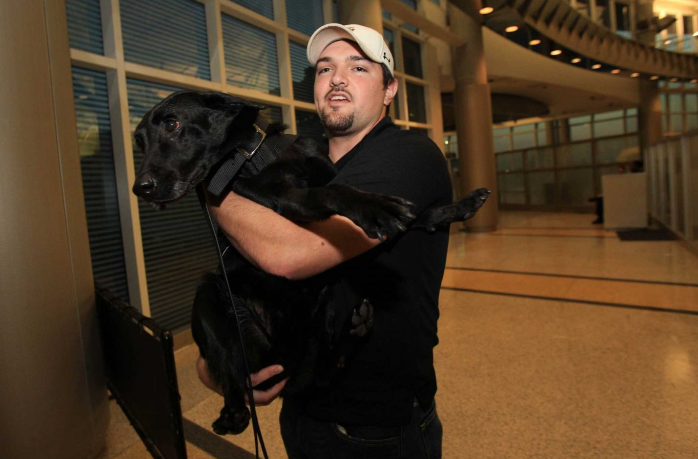 The call came in January, just as he stepped out of a class at Texas A&M University.

Ivy was 7 and her military career was over. Did he still want her?

The only hitch, Heath would find out in a follow-up email, was a $700 bill – the cost to transport Ivy from the East Coast to Houston. Heath knew he’d come up with the money, but he didn’t know how easy it would be. Mission K9 Rescue, a nonprofit group, took over the fundraising. The deal was sealed in less than 24 hours.

Kristen Maurer of Mission K9 accompanied Ivy to Houston. She’s facilitated dozens of these reunions, and each one makes her cry.

“The dogs don’t forget their handlers,” Maurer said, “even when they’ve been separated for years.”

Heath, she added, is such a nice young man. She hugged him and then hugged Lauren Miller, Heath’s fiancee. 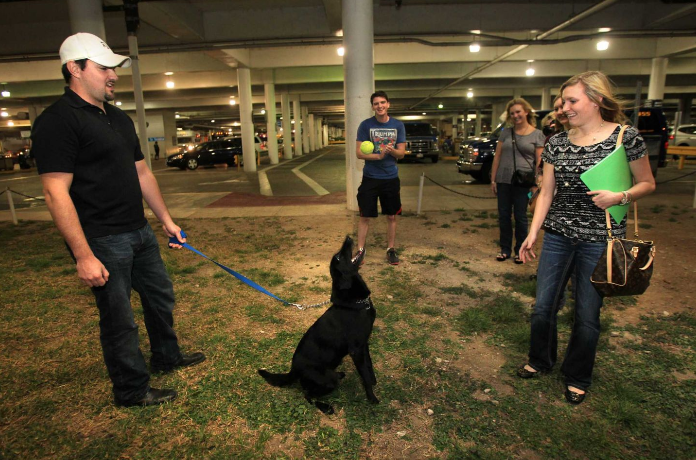 Heath, 25, grew up in Katy. He planned to go to college, but he wanted to serve his country first. Uncles and cousins had served in the Army; he chose the Marines.

He left for boot camp in 2006 and deployed to Japan in 2008. During his five-year stint, he spent much of his time training younger infantrymen. When he got the chance to work with bomb dogs, he jumped at it.

Heath still laughs when he remembers the day he was paired with Ivy. He had his eye on much bigger, male dogs. “Ivy,” he said, “was the smallest dog – and a girl!”

The Marine quickly came to appreciate all that Ivy could do. During their seven months in the southern Helmand Province, she found four roadside bombs, three of them activated.

Without Ivy, Heath said, those bombs might have exploded and caused catastrophic injures.

“She was my companion, my best friend, and she protected me, too,” he said.

Mostly they worked, Heath said, trudging through mile after mile of desert in search of bombs. But he and Ivy also ate together, slept together, and even watched movies together.

Heath’s best human friends were other dog handlers. When they were able to relax together, they bragged on their animals as if they were their children. 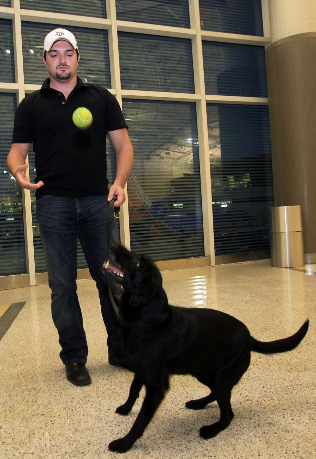 After the reunion, Heath and Miller had simple plans. They were going to get some fast food take-out, and relax at home. But then, Heath and his war dog Ivy had to drive to College Station.

Heath’s anxious to finish A&M in 2015 and begin a career in finance. He’s very much looking forward to his marriage to Miller – they’re planning a July wedding and a honeymoon in Costa Rica.

And then there’s war dog Ivy.

She protected him, now he plans to protect her. They are, after all, Marines.

Will you help make more of these reunions a reality?

Your support is deeply appreciated and is paramount to our ability to “Lend a Hand to the Paws that Serve”.

You can donate via Paypal to MissionK9Rescue@gmail.com